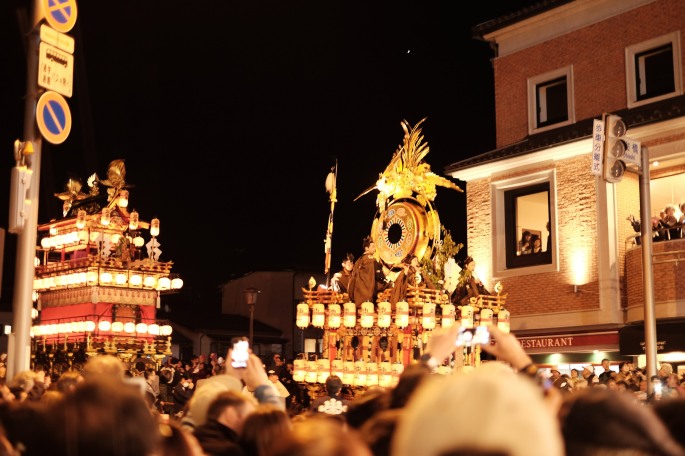 As the seasons change one exciting form of public entertainment is the many festivals, often regional or for specific purposes, which take place in Japan. When I say Japan I’m really speaking about my own very limited experience, in the Hida Takayama region of Gifu prefecture, and the Takayama Spring and Fall festivals.

In April you can truly witness the change of seasons, with drastic changes happening overnight. Literally, I’ve woken up to fields of flowers that were not there the day before.
Takayama’s spring festival, or Sanno Matsuri, celebrates this change of season. Takayama’s festivals are generally regarded as one of the best in japan, due to the sheer beauty of the elaborate displays called Yatai.

Now let me take a step back here. It’s hard to know how to describe what the Yatai is, and the closest english is probably “parade float” but I really hate to use those words for two reasons. 1. I’ve never been a fan of parades, and I wouldn’t compare one to the festivals. and 2. When I say “float” it makes me think of an inflatable Donald Duck ballon or something, and the Yatai carts are ornate wheeled displays with intricate carvings, lacquering, woven-work and decorative metal-work, found both on the outside and inside – some with intricate mechanical puppets which perform as part of the entertainment.

My understanding is that the different Yatai carts were created by different surrounding communities, with contributions from various artisans from those communities. Over time they would be further improved, and with a bit of competition between the communities the carts would become even more beautiful.

As expected there is music, dancing, performances, and of course my favorite… many differed food stalls to choose from. I recommend attending one for yourself if at all possible.